A Farewell to Arms (1957), directed by Charles Vidor and starring Rock Hudson and Jennifer Jones as Frederic Henry and Catherine Barkley respectively, provides a meaningful and enchanting narration to the lives of these individuals and the prevailing debacles that would have been abundant during World War One. 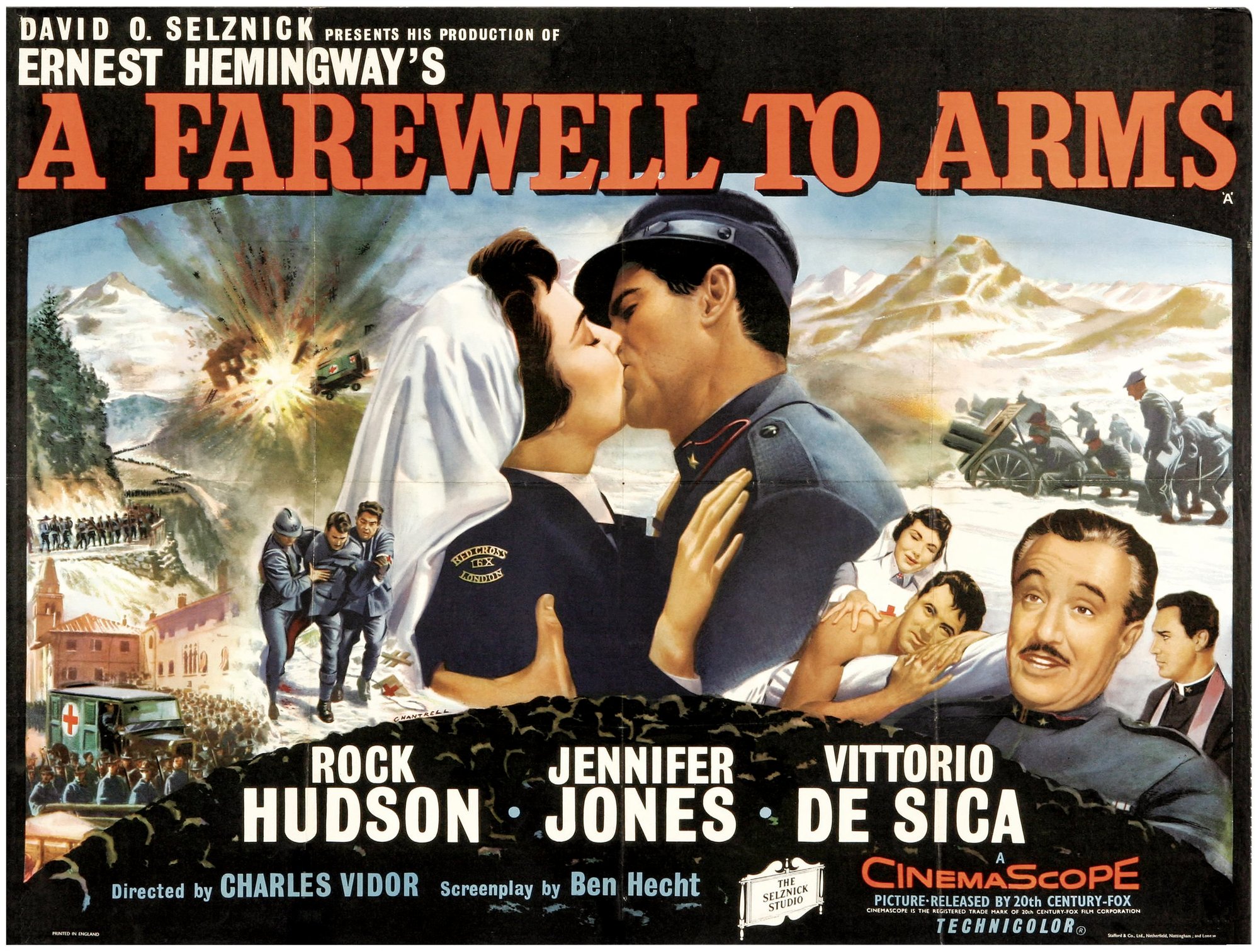 I enjoyed the way in which the film opens with Frederic narrating – his voice-over makes for an effective beginning that already helps us relate to the mysterious and – undoubtedly – traumatic events, considering it is indeed a film of the Great War.
His voice really sets the tone and adds to the auspicious tenure of the film – that combined with the romantic, enchanting soundtrack by Mario Nascimbene, along with the background information of World War One, the film’s romantic and yet foreboding foundations are conveyed to us.

The ‘relationship’ of Catherine and Frederic – to begin with – seems to be much more comical compared to that of the novel, and there was not much of a build up to it; it was very sudden and I felt that their meeting and ‘relationship’ could have appeared more realistic, authentic and less comical had there been more growth and development (in a similar way to the novel).
I felt that the suddenness took away from the entertaining and intriguing partnership that Frederic and Rinaldi have, as it is only slightly regarded in the opening stages of the film (in the novel, their playful and humorous kinship is an aspect that I particularly enjoyed). I think the opening of the film did not allow their good–natured friendship to be thoroughly shown, as the instant connection to Frederic and Catherine took over.

As the film progressed, and Frederic must return to his role as an ambulance driver – alone – it felt slightly saddening, as the progression of Frederic and Catherine’s relationship was, in my opinion, bewitching. To witness them ‘separated’ made me apprehensive, as the ensuing drama that Frederic faces make me yearn for something more charming and picturesque – as such was Frederic and Catherine’s relationship displayed throughout.  For example, the idyllic scenes of Italy’s lakes were provided as a backdrop to their bond, and such places were the definition of charming and picturesque.

Furthermore, my yearning for them to not be separated was also in part due to the phenomenal, original soundtrack by Mario Nascimbene. It is authentic and tender in the scenes of Frederic and Catherine, and ambient and sorrowful in the scenes in which it needed to be – such as their separation. The music was therefore vitally important in the emotions that the film evoked.

Interestingly, however, the final scenes of the film provided minimal background music, a decision I think enhanced, rather than belittled the sadness evident in the scenes. Instead, the silence led to a much more profound depiction of the endings event, and made it even more personal and realistic – it was almost as if we are there. There were no distractions and no disturbance, but simply our own thoughts and emotions to what we were witnessing.

Not only this, but the actors also played a role (pun intended) in my yearning for their reunion. Rock Hudson plays the function of a very masculine and rugged, handsome lieutenant extremely well. What also makes him an exceptional actor is his ability to switch from the slightly arrogant, charming and resilient masculine demeanor he holds into that of a softened, melancholic and forlorn human when needs be.

One of the final scenes in which we see Frederic momentarily staring out the window, whilst we hear the rainfall, with its inherent foreboding, outside makes for a very poignant scene. The atmosphere the sinister rainfall provided also led to a connection between us, the viewers, and Frederic. I felt that I knew what he was thinking in this scene, whilst he was staring out at Catherine’s worst fear: the belief that a shocking event may occur, even though we desperately do not want it to.

Finally, what I thought was an exceptional decision made by director Charles Vidor, was the fact that the ending provided a voice–over, only this time given by Catherine. This is the opposite to the beginning of the film where we heard Frederic’s narration. By the film choosing to end in such a way, the film’s premise comes full circle: we had begun with a volunteer army lieutenant who seemed to be breezing along with the war, its women and its fellow comrades. Yet, it ended with the voice of only one particular woman playing, what could be interpreted as, in his mind, a final farewell to what could have been and to what Frederic had been clinging on to. The film comes full circle by beginning and ending with the two main protagonists telling their story – a story that indeed does not have a happy ending, and Catherine’s voice we hear in the final moments is a reminder to this.

167 thoughts on “Sophia’s Review of A Farewell to Arms”