I went to the World Aflame exhibit today and wanted to share what I learned. This exhibit at the Fredericksburg Area Museum was very interesting. I loved how it only dealt with people and events that took place right here in Fredericksburg. What I enjoyed looking at the most were the propaganda posters. One of the posters on display pictured a golden lab resting his head on a blue and white handkerchief and a lone gold star is hung behind him. At the bottom are the words, “…because somebody talked!” When I first saw this, I had no idea what the phrase meant, but after reading I saw that it played on the government’s desire to keep the citizens and the soldiers quiet. This poster is a part of the “loose talk” genre, since it was believed that any sort of “loose talk” could end up hurting the troops and ultimately the United States chances of winning the war. This is an example of another way in which the government used these propaganda posters to guilt trip people into enlisting, as well as into embracing a nationalist agenda.
What really shocked me at the exhibit, and which changed my perspective of Americans in the war, was a letter written by a soldier named John to his wife, Emma. It was written August 7th, 1945 and is about his joy and elation over the creation of the atomic bomb. Prior to visiting this exhibit, I had always taken the dropping of the atomic bomb on millions of innocent people in a very negative light and so I had assumed that the soldiers felt the same way. But this particular soldier had exactly the opposite reaction. He was sent to be clean up duty in Hiroshima and so saw first hand what the bomb had done, he even took pictures to send back to his wife. Even after seeing the devastation in Japan, he still praises the bomb and calls the Japanese fools for continuing to fight. This gave me the startling realization that some soldiers were happy with any kind of end to the war no matter what effects it could have and that some American soldiers and citizens back home actually thought the atomic bomb was the best invention of the time. 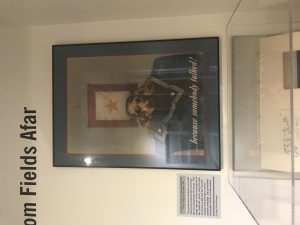 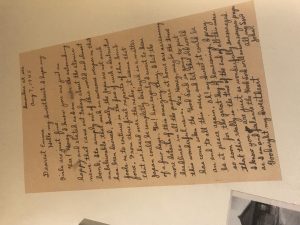