This exhibit really focused on the final days of the Great War, as well as the cultural changes that emerged after. The section on women in the war was particularly interesting. They had mannequins set up around the room, each showcasing different uniforms and clothing that women would have worn. The man who was running the exhibit told us that women’s trousers did not become popular until World War I. They were made to be baggier and longer so that no ankles would show, and they had buttons up the back so that there was no possibility of them sliding around while she worked. Prior to this, it was not socially acceptable for a woman to wear trousers. The biggest driving force for this change was most likely the need for women workers during the war, which meant that new pants were needed that could accommodate certain movements more easily.
The women’s suffrage movement also started to gain more followers post-World War I. In the exhibit they gave the example of the organization, YMCA. The YMCA hired over 5,000 women to work at canteens in France. The workers handed out coffee and books to he soldiers. Women also took on other non-traditional roles as well. But, even with the progress gained, women were still seen an inferior, especially when in regards to money. The exhibit had a poster of Joan of Arc holding up a sword heroically and wearing armor. At the bottom it encouraged women to buy war stamps, not war bonds. This implied that women could never be the main breadwinner of the family or understand how finances work to the extent that a man would. I thought the message at the bottom was very interesting, especially when paired with the heroic Joan of Arc, showing that while some strides had been made, there was still much more to be done in terms of equality.
Seeing the outfit of the traditional red cross nurse made me think back to Mary Borden’s description of the women in white. It helped to get some visual on what that really would have looked like. I completely understand how it could be described as ghostly, since it is very flowy at the bottom and the only bit of color is the red cross on her hat and chest.
After going to this exhibit, I was surprised to find out just how much World War I helped the movement for gender equality but did not do nearly as much for the issue of race equality in America. 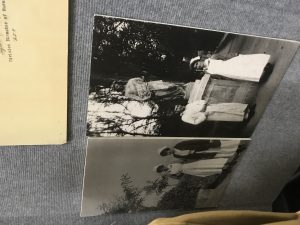 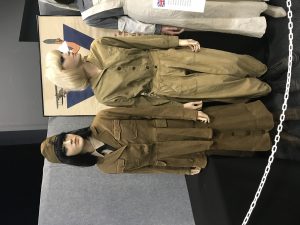 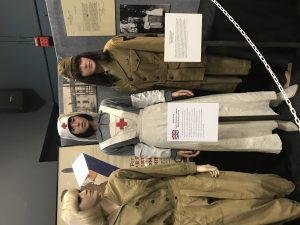