This past week I went with another class of mine to the African-American History museum. It was amazing and actually had a lot of information about African-American soldiers during WWI, which I wanted to share with you all here. Many African-Americans fought primarily as support troops and the ones who did see actual combat fought with the French, not America. Many believed that fighting would promote better treatment in their hometowns and where angry when not much changed. One of the most interesting things I learned was that W. E. B. Du Bois published an essay titled “Close Ranks” which stated that African-Americans should put aside their anger and differences and come together to fight for and support the war. Later, after seeing that fighting in the war did nothing for equality, he would admit that this editorial was a mistake. The exhibit also provides stats for how many soldiers were killed, wounded, etc. It said that 367,710 African-Americans were drafted and that about 400,000 served. 200,000 served overseas, 750 died in combat, and another 5,000 were wounded. The last two things I thought were most interesting was a quote they had displayed by Claude McKay, a Jamaican writer and poet, and a propaganda poster. McKay wrote, “If we must die, O let us nobly die, so that our precious blood may not be shed in vain… Like men we’ll face the murderous, cowardly pack, pressed to the wall, dying, but fighting back” (1919). Lastly the poster reads, “Colored man is no slacker”. It depicts an army of other African-American soldiers marching and holding the American Flag, which is ironic since they had yet to gain any sort of equality. 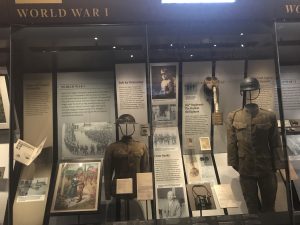 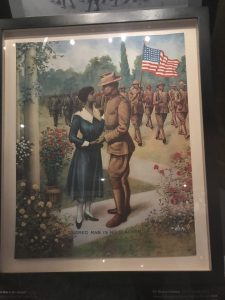 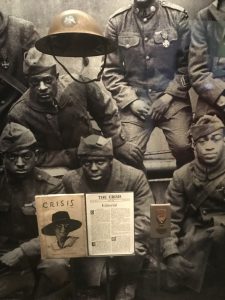 2 thoughts on “My Trip To The African-American History Museum”