Alternative Title: Why I Ugly Cried so Much in Public

Set in late 1916 and 1917, “Beneath Hill 60” follows the incredible true story of Oliver Woodward and the 1st Australian Tunneling Company as they attempt to mine beneath German lines. The film delicately exposes the agonizing reality that was underground warfare in ways beyond simply telling us, the audience, it is so. It whispers warnings of potential threats seemingly into our own ears, transforms the movement in enemy tunnels and the hushed clings of mining materials into goosebumps on our arms, and paints the heaving breaths of the men 90 ft below the surface onto our own bodies. “Beneath Hill 60” is nothing short of an experience—a film done so well it has become tangible and puts its audience on the front lines with its actors. 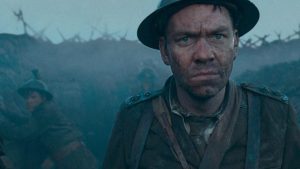 The film opens in on Lieutenant Woodward (played by Brendan Cowell) lacing up his boots in a well-lit room preparing for, what we presume at this point, is some sort of medaling ceremony or recognition for his wartime efforts. Quickly the scene cuts and we refocus in on Woodward, this time caked in grime and sweat, shuffling through the labyrinth of tunnels by candlelight. He becomes lost and employs the help of the increasingly distressed young sapper, Private Frank Tiffin (Harrison Gilbertson). Tiffin leads Woodward to the officer’s dugout where he is met with considerable disdain by the other commanding officers for joining so late in the war. Slowly, and throughout the entirety of the film, Woodward wins over the men and other officers with his natural leadership and apparent skill for mining. The film ends on the factual detonation of 990,000 pounds of explosives and, if for no other reason than pure shock value, hasn’t won over its audience yet, includes a final scene of the surviving characters being decorated in historically correct medals and garb. 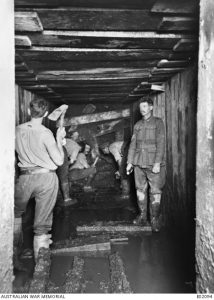 Masterfully cutting between scenes of intense action on the front lines, to secondhand experience of the cannonade, to the pre-war life of Oliver Woodward, “Beneath Hill 60” is able to intertwine the confusion and terror that exists in war and translate it into a moving experience for any and all who have the pleasure of watching this film.

Casting, undoubtedly, contributed to the artfulness of the film as well. Brendan Cowell evokes the certain kind of authoritative-but-empathetic air that anyone knowledgeable of Lieutenant Woodward’s story would expect. Frank Tiffin (Harrison Gilbertson), shows the audience the perfect mix of fear and strength that must come from fear in order to cope with the trauma that is the Great War. Jim and Walter Sneddon (Alan Dukes and Alex Thompson) show the unfortunate familial toll in such a way that one cannot help but reach for a box of Kleenex when Jim meets gut-wrenching, tear-jerking demise.

From the gradual widening of the camera lens to depict an exit from the tunnels to the use of the actual box crafted for Woodward in the trenches of the Great War, no aspect of the creation and filming of “Beneath Hill 60” was left unaccounted for. As such, this film not only is able to transport its audience directly to the front lines, but details the story of a much forgotten crowd of heroes.

Private Frank Tiffin (Harrison Gilbertson) during the reenactment of the detonation of 990,000 pounds of ammunition on June 7th, 1917

In a film that hinges so much on the silence of its actors as they dig beneath the enemy territory of Hill 60, this film speaks volumes.

In the words of Lieutenant Oliver Woodward:

“That’s your heart. Feel it? You’re hearing your own heartbeat.”

I suspect more than just a heartbeat, all viewers of this masterpiece we call “Beneath Hill 60” will hear the sniffles from noses, feel the burn of hot tears on faces, and choke on the sobs stemming from their throats.

Keep a Kleenex nearby. I suggest several.

In case you were curious, here’s the trailer: