The Lost Battalion (2001), directed by Russell Mulcahy, was aired on television’s A&E network in 2001. This historical film is based on a true story of the brave and dedicated actions of the former New York lawyer, Major Charles Whittlesey and his battalion of 500 American soldiers and immigrants. 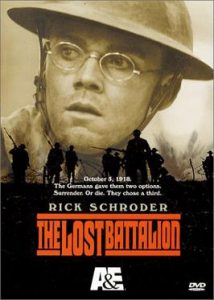 The movie takes place on October 2, 1918, in the Meuse-Argonne Sector in France. The main character, Major Whittlesey played by Rick Schroeder, is assigned to what seems like a suicide mission by General Robert Alexander. Though he voices objections and reasonable concern, he is silenced by his commanding general who claims that they must make  “acceptable losses”. This movie is an excellent re-enactment of the intense struggle to survive in the horrors of WWI.

Being one of the few war films I ever watched, during this, I was at the edge of my seat and stopped it several times as if watching a horror movie. However, unlike horror movies where I can tell myself it is not real, this movie reflects the real struggle of repeated German attacks with no support and occasional hindrance from their own artillery.

Not only was this film an intense and suspenseful look at a real case of hardship and grueling nature of combat, but it also focused on the United States involvement in the war. Up until the U.S. declared war in 1917, the U.S. has desperately tried to stay neutral. In the film, the commanding officers had stated that it was because of the Woodrow Wilson, that the U.S. military and troops were unprepared for the war, thus leading to a lack of funds, ammunition, and resources for the soldiers. Without the proper resources, the U.S. military depended on French weaponry and supplies which were not only a few to come by but also they were not as advanced as American or German weaponry. The U.S. reliance on French weaponry and lack of U.S. resources left soldiers at odds against the Germans.

I think the film did a good job of depicting this throughout the movie. The soldiers were without good weaponry, lack of food and medical supplies but through Major Whittlesey leadership, he and his men overcome the most impossible odds.

Major Whittlesey, like his soldiers, was not only at odds against the Germans but also his own commanders doubted his strength and devotion due to his previous career as a lawyer who volunteered to enlist. Similarly, most of the enlisted men were American immigrants or poor working class from the streets of New York. There is a very strong ethnic presence of the soldiers from New York, and that is quite an accurate representation of the era. Immigration between the 1890s and 1930s brought many to America through New York City, and as film shows, men clash when cultures blend. There is a lot of unsavory banter between the Irish, Italian, Jewish, and Polish in the film. These men, from ethnic groups that would otherwise be hostile to one another in the great melting pot of the USA, learn to work together as brothers in arms.

One of the best scenes in the entire movie is when Lt. Leak was captured and brought to German headquarters.  The lieutenant refused to eat, drink or smoke with the German major who questioned him and even try to lead the major on by claiming to have more food and soldiers then they expected. The Major wants to know why the Americans refuse to surrender and Leak tells him his men are different than his Germans. He says that what the major is up against is a bunch of Mic, Polack, Dago, and Jewboy gangsters from New York City and they will never surrender.
Throughout the movie, the iconic patriotism of the American soldiers persisted leaving the Germans unprepared to hold their position. Even at the end of the film, when the American battalion is out of food, water and are repetitively looking for food and ammunition from the dead soldiers, the soldiers are still prepared to hold their position at all costs.

The movie is an excellent recreation of this intense struggle to survive. I love how this movie also depicts the civilian-turned-soldiers coming together as brothers while being blood covered, starving, hurt, and homesick. Although this movie was made for television, it is sad that more films of this nature are not out in theaters for the masses. Too many war movies end up getting ruined by Hollywood changing what really happened and adding unneeded romantic mushiness. This film sticks to history.