For the poems we have for tomorrow, one, in particular, caught my attention: “Tri-colour” by Robert Service. Not knowing if we will talk about it tomorrow, and also knowing myself and the high probability that I will forget by the time tomorrow comes, I thought I would put a little something here on the blog.

I am hugely into the symbolism of flowers and elements in literary works! Every element and every flower has a meaning and I think that poets and writers know this too and pick which ones they use very meticulously.

In “Tri-colour” we get the poppies, the cornflowers, and the lilies.

We’ve talked about poppies before and how they are symbolic of the war. Jordan even made a separate blog post earlier in the semester about the art installation of poppies (which I conveniently linked here, 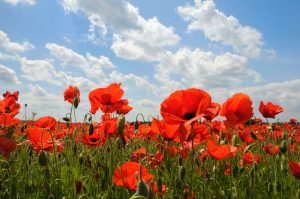 so if you haven’t seen it, go look at it!) I’m sure you all know what a poppy looks like but here is a picture just in case. It is obvious why Service uses the poppies as the soldier’s blood. Poppies are symbolic of sleep, especially deep sleep, which if any of you have seen the Wizard of Oz you should be familiar with the poppy field scene. Poppies, because of both WWI and WWII are now considered the flower of death and remembrance. Also, poppies have a meaning of innocence and peace within death which is why poppies use to be used at funerals, including funerals for soldiers.

Then there are the cornflowers. I love cornflowers! They are these really cool blue-purple flowers that remind me of the flowers in Horton Hears A Who (yes I know it is actually a clover, 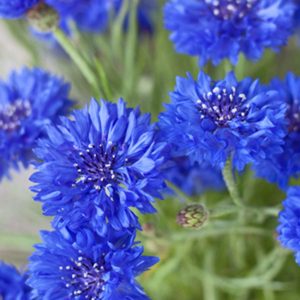 but it’s all the same). Many people will recognize cornflowers from the sides of country roads or in wildflower fields. Cornflowers are one of the national flowers of Germany, which if you think about Germany in the context of the war is kind of crazy. While the meaning of cornflowers don’t really line up with how I think they are being used in this poem, it is still super interesting. Cornflowers are the flowers of wealth, prosperity, fortune, friendship, but in France, cornflowers became the symbol for the Armistice.
Next are lilies. Now, the thing with flowers is each color, 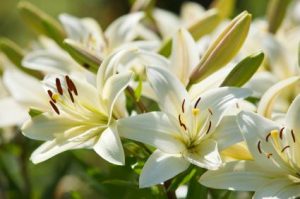 or variant, of them, stand for something else and lilies come in different colors.  So white lilies symbolize purity and chastity and are linked to the Virgin Mary, while other’s are linked to friendship, devotion, sympathy, wealth and prosperity. While the poem never specifies which color of lily is being talked there is a generic symbol for restored innocence after death, which is why lilies are known as a funeral flower.

I find it super interesting how each of the flowers relates to death in some way, how even the shapes and colors of them are used as images of dead men. The poppies as the blood, the cornflowers as eyeballs which I don’t think I can ever unsee now, and lilies as headstones.