I’ve read Dulce et Decorum Est several times, but reading it this semester really reminded me of another poem I’ve read in the past year, but I can’t quite put my finger on it.

Over the summer I read Beat! Beat! Drums! from Whitman’s Leaves of Grass and I see some similarities in the pieces (Especially with Owen’s “Gas! Gas! Quick, boys!” line and the opening line of Beat! Beat! Drums! being “Beat! beat! drums!—Blow! bugles! blow!”) but I’m not entirely sure if that’s the piece I’m thinking of.

Does anyone know of a similar piece? I’m wondering if maybe I’m just remembering reading Dulce et Decorum Est in Modern Poetry or if my brain has completely melted to mush and that Whitman piece is the one I’m thinking of. 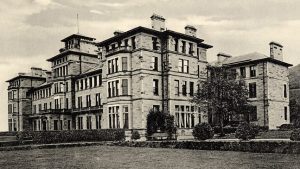 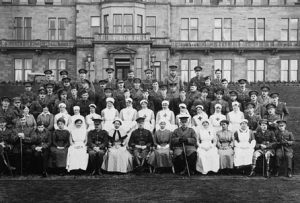 Nurses and patients at Craiglockhart 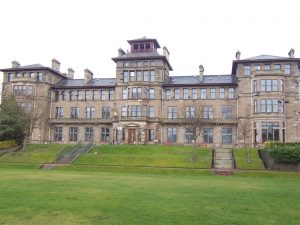 Also, I found that Craiglockhart had a little magazine, Hyrda the Magazine of Craiglockhart War Hospital, which Owen edited at one point and included poems by Sassoon. 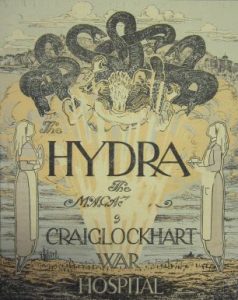 First published some time ago, but even more relevant as we work on Daly, you can read it HERE.

What are you all’s overall thoughts on Borden now that we finished The Forbidden Zone?

I was talking with Morgan a little about this and I’m curious to see what everyone else thinks.

Personally, I think I liked it. The book  evoked such a visceral reaction from me that often times I couldn’t tell whether I was angry or happy  just have gotten the chance to read  I text that made me feel so strongly.

Did anyone have any similar reactions?

Okay, so while trying to find some show to watch on Netflix as background noise for working on a project I came across a show called “Our World War”. It is three one-hour-long episodes about British soldiers at the Battle of Mons, I believe. I have not watched it yet, but I think now I have to! If anyone else has watched it, let me know what you thought of it. Once I watch it, I will post in the comments how I feel about it. 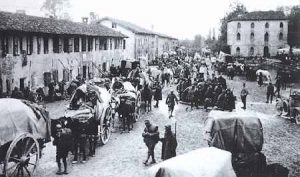 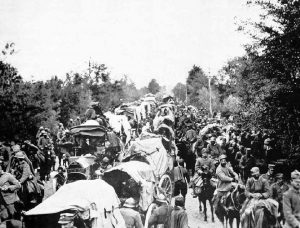 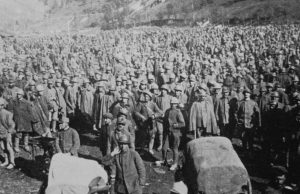 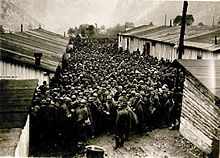 August 1918. In the Hundred Days Offensive, the US has been fighting alongside the Allies to end the brutal and exhausting conflict that is playing out across the globe; the Marines have spent the summer in the infamous Belleau Wood. The “Spanish Flu” epidemic is gaining strength; it  has been detected in a US military camp and eventually will kill more than 20 million men, women, and children. Russia is in chaos; the Bolsheviks, bolstered by anti-war sentiment, have recently murdered the Czar and the Romanov family. Yet in just a few months, the guns will fall quiet: the eleventh hour of the eleventh day of the eleventh month, nearly four years later than experts initially predicted the end of the Great War. 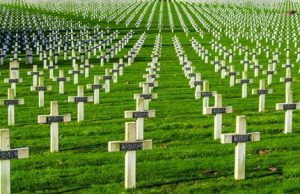 How did the men and women of the First World War experience and record their experiences in this fundamental moment of modernity? How does our own distance, a century beyond the world’s baptism into mechanized killing, both enable and hamper our understanding of that experience, and what do we learn from The War to End All Wars?  I hope our semester is the beginning but not the end of your work considering those questions.