Armistice Ceremonies in France in pictures

The Courage and Folly of WWI (pics)

The Caribbean Honors its WWI Soldiers

Something that I noticed has been a major theme in many (if not all the books) has been the worth behind the war, or rather, the lack thereof. I think we saw this especially on page 24 of the Borden text. On that page the General is speaking all about how these men will die before they ever so much as get the chance to return home. Much like how all sides knew before Nov. 11, 1918, that the war would end, it seems as though the deaths of these men is worthless. That any aspect of this war up until this point in the texts we’ve read and so on has been worthless, and it was this worthlessness that reminded me of the Tennyson poem The Charge of the Light Brigade. I’ll include the first part of the poem below:

In The Charge of the Light Brigade, the 600 know they are going to die (much like the men the General is speaking to), yet they go on into battle anyway. In daily life, if we know we can prevent an unfavorable result of something, we make ample effort to avoid that outcome. However, in both the text and the poem, the men being described know that they will die and that in the end their actions will be worthless if the war continues (as it often does because aren’t all wars a continuance of previously unresolved conflict?).
I wonder how these men kept their sanity and continually pushed forwards into dangerous and fatal situations knowing full well the outcomes. Was it drilled into these people that because they will die in favor of their country, their country will advance in the war?
Personally, I believe that half a league ≠ a full league and death counts do not measure the success of a war.

I’m not sure exactly which rabbit hole I fell into to find these, but I found some really interesting late 1920s to early 1930s cartoons depicting life during The Great War.

This first one is an Oswald the Rabbit cartoon directed by Walt Disney entitled “Great Guns.” It features a lot of the new technology being developed including tanks and machine guns although it also shows some of the more “primitive” weapons people were forced to use in the war.

I think this cartoon is super interesting because(as we touched on a little bit in class) World War I marked really the beginning of a move from personal combat (and to hand combat and people actively killing each other face to face like Paul did to Duval) to removed combat (much like the contemporary style we use today where often times people never really come face to face/ warfare becoming more mechanized).

This second cartoon, also an Oswald the Rabbit piece, is called “Not So Quiet” (already interesting since All Quiet on the Western Front was published the year before this was released). “Not So Quiet” more prominently features aspects of trench warfare (even going into aspects as detailed as the amount of water and liquids that would accumulate inside the trenches). Another neat addition to this cartoon is the depiction of armistice at the end. We spoken lightly in class about how so many people knew the war would come to an end and so countless lives were lost wastefully. This cartoon shows that with Oswald being chased by a bomb until the armistice and then just having the chase end.

The final cartoon is an early example of Looney Tunes and is called “Bosko the Doughboy.” It clearly shows what life in the trenches was like down to the louse on the sergeant. This one also shows the water in the trenches and the boards placed on the ground to make walking in them easier.

I think all of the cartoons are super neat, not only because of the way they depict World War One, but because of how it seems like the world was coping with what had happened after the fact.

So, like the title of this post says, this is not directly related to WW1 or “All Quiet” or anything else we have talked about in class. This is just a super weird coincidence that I have to share with you all.

For those of you who do not know me, I am completely obsessed with my dog, Finley. He is adorable and I adopted him back in April. I was looking through his paperwork and noticed his birthday, and by noticed I mean it was glaring at me! November 11th, 2008.

Why was this date popping out at me? Why did I recognize it? The Armistice! November 11th, 1918.

So from now on, my sweet little Finley has a new nickname: My Armistice Baby.

Enjoy some pictures of my handsome man: 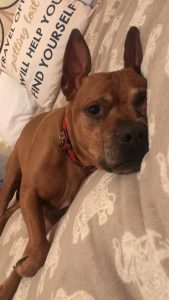 I call him “Ears” because of this picture 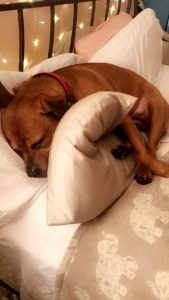 This was taken last week. Yes, this is actually one of the MANY ways he sleeps 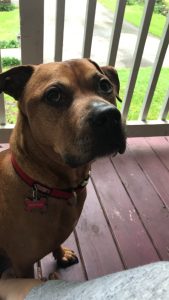 His “trouble” but also handsome look

Isn’t it strange things happen all the time and such small work events happen on the anniversary of big world events? I’m the type of person who is crazy obsessed with dates (fun fact, me and Leonardo Da Vinci were both born on April 15th) and will sit and research dates for hours and find strange connections between years and decades. Do you have any fun dates in your life that are connected to big world/historical events?