Last week, Addie and I went to one of the museums downtown to look at the war exhibit. The man working there was REALLY sweet and helpful, and talked to us one-on-one for the majority of our time at the museum, answering all of our questions. What I found really interesting right away, was the fact that one of the female mannequins was wearing pants. When I asking the man about this, he told that it was because rules had become more relaxed due to the war. Before that the war, women were not allowed to have certain jobs, however, the war trumped everything. While some women served as nurses, others took up the tools their husbands had traded for weapons and worked on their family farms and with the women’s land army. Traditional activities like sewing and knitting also took on a new importance as items were needed to be shipped overseas. Women also took over the factory jobs left open by men when they went off to war. At the beginning of 1915, Dupont chemical company directed all its manufacturing and production towards the war effort. Since social crisis tends to trump political issues, one of DuPont‘s plants started the Women’s Munition Reserve Seven Pines Bag Loading Plant, which was located on the York River near Williamsburg, Virginia. Despite the potential danger, hundreds of men and even women went to the plant in search of employment. It turned out that female workers made up most of the workforce at Seven Pines. Women of every status worked there, and it was not unusual for middle and lower-class women to work side-by-side, sewing and filling powder bags with Virginia’s first lady, Margaret Davis. Fashion norms were also way more relaxed because of the war effort, and long skirts were decided to be impractical in factories, especially in factories with flammable materials. DuPont issued trousers to the women munition workers of seven Pines, however, to maintain propriety and keep the clothing feminine, they were referred to as “womanalls” and “trousettes.” 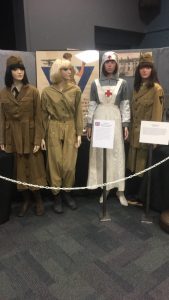 The man (I hate just referring to this guy as “the man,” but I never got his name) working at the museum also showed me this propaganda poster of a woman and asked me what I noticed about it. It was a poster which showed a woman in armor, which reminded me of when Professor Scanlon told our class about the War Angels that came down and helped the soldiers. The on this poster was Joan of Arc. The poster read: “Joan of Arc Saved France, WOMEN OF AMERICA SAVE YOUR COUNTRY BUY WAR SAVING STAMPS.” I told him that most of the propaganda we saw in class had to do with buying war bonds and not stamps, and he said this was was a poster directed towards women, so it said stamps and not bonds because women can only afford to buy stamps since they don’t have their own money, they have what is left over from their family’s estate and allowances. Although it is a very sexist poster, it was very relevant back then and not considered a sexist propaganda poster to the women of that time. 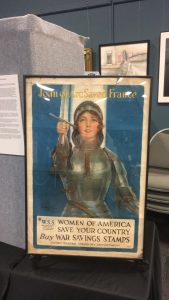 Yesterday I went to the museum in downtown Fredericksburg for the WWI exhibit, World Aflame, and saw some really awesome, yet really depressing, exhibits. My favorite one, I think, were the artifacts about a marine named Virgil Houchin who died at Iwo Jima. The case had a picture of Virgil and his wife Cora, his watch and wallet (which still, seven decades later, held a dry cleaning ticket), his purple heart (awarded to him as a recognition of a wound received in action) and the medal’s certificate, and a few undelivered letters. When reading up on the watch and wallet, I found out that they were sent home to Houchin’s family after his death at Iwo Jima. To my surprise, they were the only belongings of his that his wife received. Even though I found this kind of sad, what I found heartbreaking was the letters. Cora had worked with their four-year-old son, Vernon, to create one of the letters displayed in the case. She had modeled the letter’s of Vernon’s name and, like any four-year-old would, he did his best to copy them for his father. Cora also wrote a little note to her husband, which read:

“Vernon’s name he printed and some numbers on the other side. Just use your imagination and see his working hand doing this. He has the letters even if they are not all in the right place.”

What really broke my heart, was that the letters in the case were all undelivered because the person they were for died before they arrived to him. Word of Virgil’s death at Iwo Jima did not reach his wife Cora for nearly two months, however, in the meantime, she continued to write to him. I could never imagine writing cheerful, encouraging letters to my husband for two months, and then open my mailbox one day, expecting a letter from my husband, and instead of receiving all of my letters to him marked “undelivered” with word of his death two months after the fact.

And now, for some pictures! 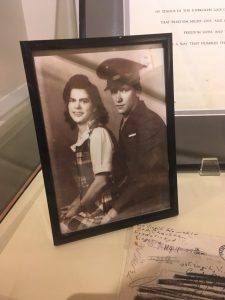 The certificate of his death 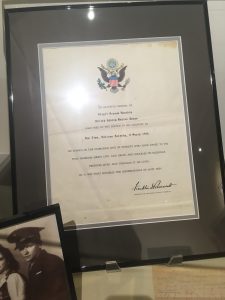 A picture of Virgil, his watch and wallet, and the letter from his wife and son 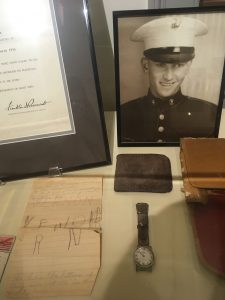 The Purple Heart medal and the certificate that goes with it 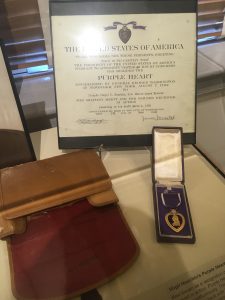 “I hope we don’t have a Third World War. The U.S. is making nuclear bombs and guns.”

That was what one of my students in my practicum said to me. It immediately made me think “Oh my god, I need to write a blog post about this and tell professor Scanlon!” My guess is that he probably heard one of his parents talking about it, but this topic still isn’t something a second grader should be worrying about or talking about in line waiting to go out to recess. It makes me sad that even my little second graders are worrying about world wars and some of the issues I have talked about in a classroom full of people 13 or more years older than them.

Unfortunately, I’ve heard so many depressing things in my practicum. You’d be surprised what these little kids are worrying about. Most of which are things that they should not have to worry about ever, especially at that young of an age. For example, during my very first semester at practicum, Trump had just gotten elected. I had a little girl come up to me, tug on my sleeve and ask me: “Ms. Adams? Will my mommy and daddy be deported?” That broke my heart. I instantly fought back tears when she so innocently yet so fearfully asked me that heartbreaking, yet real, question. I had no idea what to tell her. I have no idea what was going to happen to anyone after Trump got elected, so I knelt down, hugged her, and told her not to worry about that and finish her math problems. What else was I supposed to tell her? No? Well, what if they were deported and I had told her the wrong answer? Should I tell her yes? No, of course not! It was none of my business if they were here illegally or not and I was not going to tell her that her parents were going to be deported, that’s ridiculous. I told my practicum teacher what she had asked me, and she told me that just the other day, one of the other students in the class had gone up to a little Phillipino boy and told him “my mommy and daddy said that our new president was going to kick your mommy and daddy out of America” This was a second grader. A fucking seven-year-old said that. When I got back to my dorm after practicum, I cried. Then I called my mom and told her and cried again. This little seven-year-old was worrying about her parents being deported instead of worrying about normal seven-year-old stuff. Another boy was telling his classmates casually what his racist parents were saying. And then today, I overheard a seven-year-old worrying about World War Three instead of what game he was going to play at recess. It’s just so shocking for me to witness this innocence being lost. When I was seven, I didn’t know who was president, When I was seven, I didn’t even know what the word “deported” even meant, because you learn words after hearing them from your parents when you’re that young. That just shows how scary this world is right now. It just makes me really sad that these kids, whether they understand these topics or not (they probably don’t fully understand war or deportation), are talking about or worrying about them.

I really love Mary Borden’s style of writing. I love poetry and I feel like her style is prose poetry, which is definitely one of my favorite styles because I LOVE descriptions and imagery. Normally I don’t like when writers just make lists and “take you around the town” or wherever scene is that they are describing, but the way she does it is beautiful and I am really enjoying reading this. Plus, I also love reading about anything to do with war. I don’t why, but I’ve always been fascinated by it. Either I am a dark person or just like history, who knows. My dad loves reading about war too, so maybe it’s hereditary (JK I’m adopted, so I really don’t know)? Anyways, the way she described the bombing in Belgium is so beautiful. Like, I shouldn’t enjoy reading about a sleeping town getting bombed, but I totally am. It’s so poetic and her descriptions are so pretty. I feel a little sociopathic.

I found it was really interesting how only wealthy women could be nurses or ambulance drivers during the war. However, I wasn’t too surprised, because I remember hearing that, back then, lower-status women were considered “filthy” or “whorish.” I also found it very interesting how it was a huge honor to ride in the ambulances and be a nurse during the war (I guess that’s because everyone had to “do their bit”), but that it was considered terrible and a dishonor to your family if you returned early from the war because you couldn’t handle being a nurse or ambulance driver.
Hearing/reading about all the injuries that happen at war, I don’t think could stomach being a nurse in any war. My mom’s a nurse practitioner, and just the “horror” stories she tells me freaks me out. Growing up with a doctor dad and nurse mom, I’ve never been scared of blood, and although pictures of injuries don’t gross me out, I feel like being on the battlefield and treating the wounded— just seeing all the gore in person— would freak me out. If I was a wealthy woman back then and went to war as a nurse, I wonder if I would have gotten over the terrible injuries I would have had to treat or if I would go home early. Knowing me, I’d probably cry a lot (I care way too much about people and I feel like all the fatalities and horrific injuries would make me extremely sad, like Helen Smith said she was when she first arrived) but I’d suck it up because I wouldn’t want to disgrace my family, like Tosh said to Smith.