Alright, of the two exhibitions, I thought that this one was significantly less compelling – to be completely honest. What I was hoping it would be was an exhibition discussing and showcasing how the First (and Second) World War impacted Fredericksburg, really diving deep into the issues it caused and its continued effect – instead, as is the norm with the Fredericksburg Area Museum (for those familiar), it really provided little insight as to the significance of anything they were showing (which, to be sure, were interesting pieces.) That said, I personally made some interesting observations and connections as a resident of FXBG for over 10 years now.

One of the first things in the exhibit was a flag from the local Baptist church which had embroidered on it 60 (I think? my phone died so I wasn’t able to take a picture) stars, each of which represented a parishioner who went to war. From what I understand, the flag was hung up to remind people that they were there – as if they were easily forgotten. What I thought was interesting about it though, on a personal note, was that above the flag was a list of all the people who the stars represented – one of whom was Alexander Fitzhugh, one of the original people who lived in the house I grew up in! I also recognized last names from classmates that I went to high school with, so it was interesting to see that some of the families who were in Fredericksburg then, are still here now.

On a different/totally unrelated note, upstairs in the museum they had an interesting exhibition of WWII propaganda posters and I was really interested in the similarity between that imagery in the U.S. and the soviet realist movement. I dunno – maybe I’m off-base there. 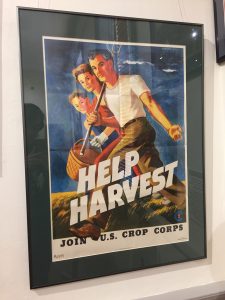 167 thoughts on “Thoughts from “World Aflame””