To say this poem is brutal is an extreme understatement. This was one of the most vivid poems out of the list that was read for today. Rosenburg uses his vivid imagery to the max to hit across the point of the horrors of war. For example, “ a man’s brains splattered”, is very intense. I was interested in what “plunging limbers” was and the meaning it had in the poem. I first imagined, soldiers, plowing the fields that were once a battlefield with barb-wire and dead bodies. After looking it up, I found that Limbers were led by soldiers with mules or horses pulling carriages of tools, food, and equipment. In the poem, the carriages were there to reset barbed wire and stakes in dead-mans land and while doing so ran over the dead, and living wounded soldiers. For example, the final line in the poem said: “we heard his very last sound, and our wheels grazed his dead face”. To add to this post, I included this picture below of a horse-drawn limber takes ammunition along the Lesbeoufs Road to the front, November 1916, pictured in the Somme, during WW1. 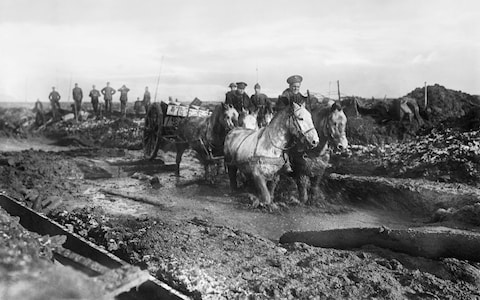