I think the point of literature is to encapsulate the human experience in any way it can, but, as we talked about in class, I often feel conflicted about who can write about what and how authentic the encapsulation of the truth is. In the words of Prof. Rochelle, all text stems from an initial truth. At what point though are we willing to accept an authors’ credentials but deny the experiences they write about?

I think collectively we’ve agreed that Not So Quiet, even though it has been written by someone who never first-hand experienced the war, was based so much on personal experience, that we approve of it as an accurate retelling of the war. With The Forbidden Zone, we’ve read in the author’s note that the broken retelling is a stylistic representation of the war, and we can inherently agree that the text is an authentic one. But are books like A Farewell to Arms that lie so heavily in a fictional story-line, authentic and as worthy of telling as the others?

So a couple weeks ago some videos of women’s fashion and VAD Nurse outfits were posted and they were extremely interesting. Well, I guess my computer knows I am in a class about WWI so my youtube is recommending to me WWI related videos. So, here is a video about British Soldiers and their kits during the war that I thought I would share with you all. 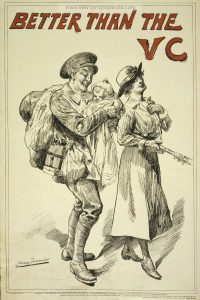 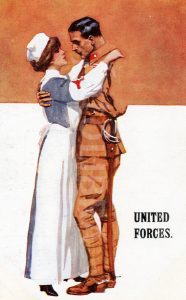 Today in class we were discussing mythical language and the angels in the short stories we read for today. The discussion made me think of how Paul and Nellie didn’t want to talk to those at home about their war experiences or show off that they had really “been in it”. Paul made up stories or told half truths in order to please his dad and the people back at home without damaging himself with the truth. The short stories and poems talking about the angels and visions of dead Germans may not be factually true but they are as much of the truth as the soldiers can tell and therefore become the truth for those at home. The “true” stories of the angels in the battlefield spread and become fact. The feelings in those stories could actually be true; the soldiers could have felt as though the strategies or weapons they were told to switch to could have felt like divine intervention or guardian angels saving them from death.

In class this morning Dr. Scanlon posed the question (and I’m paraphrasing here) “does Helen Zenna Smith have the right to write about a war she wasn’t actively involved in?” I’m curious about what everyone thinks. I think that because HZS based the story on a first-person account, she DOES have the authority to write about the war. Does anyone agree? Disagree?